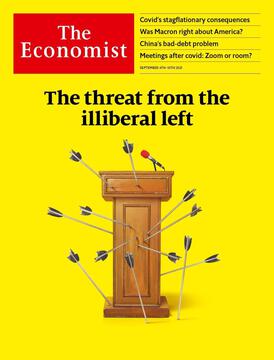 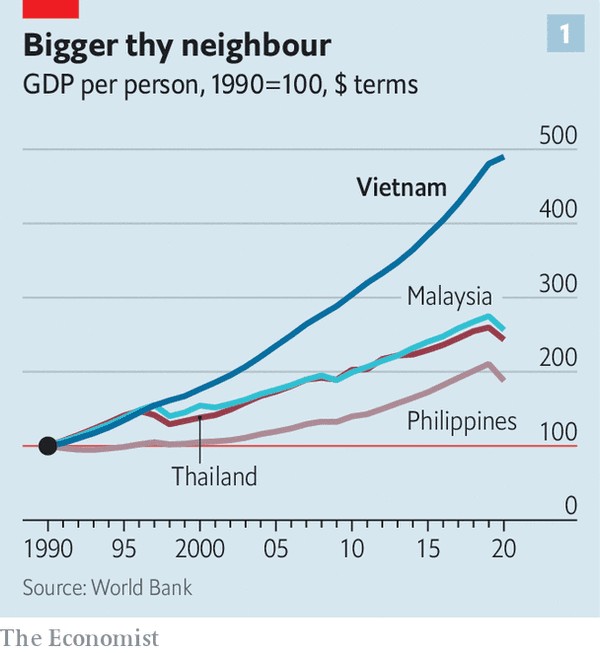 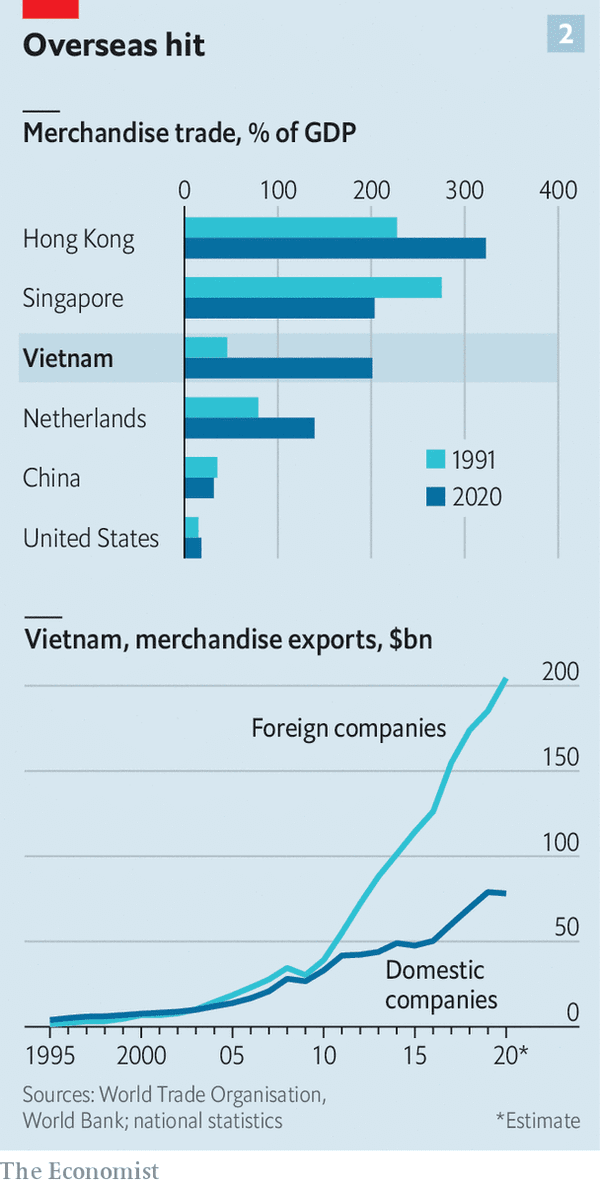 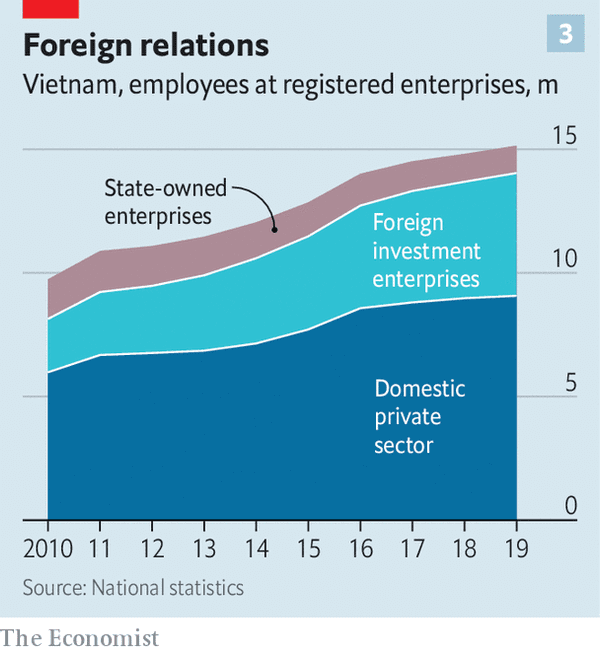 The economy that covid-19 could not stop

The economy that covid-19 could not stop
Trade and foreign investment helped Vietnam emerge from extreme poverty. Can they make it rich?

This performance hints at the real reason to be impressed by Vietnam. Its openness to trade and investment has made the country, with GDP per capita of a mere $2,800, an important link in supply chains. And that in turn has powered a remarkable expansion. It has been one of the five fastest-growing countries in the world over the past 30 years, beating its neighbours hands down (see chart 1). Its record has been characterised not by the fits and starts of many other frontier markets, but by steady growth. The government is even more ambitious, wanting Vietnam to become a high-income country by 2045, a task that requires growing at 7% a year. What is the secret to Vietnam’s success—and can it be sustained?

Vietnam is often compared to China in the 1990s or early 2000s, and not without reason. Both are communist countries that, led by a one-party political system, turned capitalist and focused on export-led growth. But there are big differences, too. For a start, even describing Vietnam as export-intensive does not do justice to just how much it sells abroad. Its goods trade exceeds 200% of GDP. Few economies, except the most resource-rich countries or city states dominated by maritime trade, are or have ever been so trade-intensive.

It is not just the level of exports but the nature of the exporters that makes Vietnam different from China. Indeed, its deep connection to global supply chains and high levels of foreign investment make it seem more like Singapore. Since 1990 Vietnam has received average foreign-direct-investment inflows worth 6% of GDP each year, more than twice the global level—and far more than China or South Korea have ever recorded over a sustained period.

As the rest of East Asia developed and wages there rose, global manufacturers were lured by Vietnam’s low labour costs and stable exchange rate. That fuelled an export boom. In the past decade, exports by domestic firms have risen by 137%, while those by foreign-owned companies have surged by 422% (see chart 2).

But the widening gap between foreign and domestic firms now poses a threat to Vietnam’s expansion. It has become overwhelmingly dependent on investment and exports by foreign companies, whereas domestic firms have underperformed.

Foreign firms can continue to grow, providing more employment and output. Yet there are limits to how far they can drive Vietnam’s development. The country will need a productive services sector. As living standards rise it may become less attractive to foreign manufacturers, and workers will need other opportunities.

Part of the drag on domestic enterprise comes from state-owned firms. Their importance in overall activity and employment has shrunk (see chart 3). But they still have an outsize effect on the economy through their preferential position in the banking system, which lets them borrow cheaply. Banks make up for that unproductive lending by charging other domestic firms higher rates. Whereas foreign companies can easily access funding overseas, the average interest rate on a medium- or long-term bank loan in Vietnamese dong ran to 10.25% last year. Research by academics for the Centre for Economic Performance at the London School of Economics also suggests that productivity gains in the five years after Vietnam joined the World Trade Organisation in 2007 would have been 40% higher without state-owned firms.

To fire up the private sector, the government wants to nurture the equivalent of South Korea’s chaebol or Japan’s keiretsu, sprawling corporate groups that operate in a variety of sectors. The government is “trying to create national champions”, says Le Hong Hiep, a senior fellow at the ISEAS-Yusof Ishak Institute in Singapore, and a former Vietnamese civil servant.

Vingroup, a dominant conglomerate, is the most obvious candidate. In VinPearl, VinSchool and VinMec, it has operations that spread across tourism, education and health. VinHomes, its property arm, is Vietnam’s largest listed private firm by market capitalisation.

The group’s efforts to break into finished automotive production through VinFast, its carmaker, may become important for the economic development of a country that is usually known for intermediate manufacturing. In July the company’s Fadil car, which is based on the design for Opel’s Karl make, became Vietnam’s best-selling model, beating Toyota’s Vios. VinFast has grand ambitions abroad, too. In July it announced that it had opened offices in America and Europe and intended to sell electric vehicles there by March 2022.

Fostering national champions while staying open to investment is not easy, however. VinFast benefits from a bevy of tax reductions, including a large cut in corporation tax for its first 15 years of operation. In August, state media also reported that the government was considering reinstating a 50% reduction in registration fees for locally built cars that expired last year.

But the country’s membership of the Comprehensive and Progressive Agreement for Trans-Pacific Partnership, and a range of other trade and investment deals, means that it cannot offer preferential treatment to domestic producers. It must extend support to foreign firms that make cars in Vietnam, too. (By contrast, China’s trade policy, which prefers broad but shallow deals, does not constrain domestic policy in quite the same way.)

Vietnam may also hope to rely on another source of growth. The economic boom has encouraged its enormous diaspora to invest, or even to return home. “There aren’t a lot of economies that are experiencing the sort of thing that Vietnam is,” says Andy Ho of VinaCapital, an investment firm with $3.7bn in assets. His family moved to America in 1977, where he was educated and worked in consulting and finance. He returned to Vietnam with his own family in 2004. “If I were Korean, I might have gone back in the 1980s, if I were Chinese I might have gone back in 2000.” Its successful diaspora makes Vietnam one of the largest recipients of remittances in the world; $17bn flowed in last year, equivalent to 6% of GDP.

The setback from covid-19 aside, it might seem hard not to be rosy about a country that appears to be in the early stages of emulating an East Asian economic miracle. But no country has become rich through remittances alone. As Vietnam develops, sustaining rapid growth from exports of foreign companies will become increasingly difficult, and the tension between staying open to foreign investment and promoting national champions will become more acute. All of that makes reforming the domestic private sector and the financial system paramount. Without it, the government’s lofty goal of getting rich quick may prove beyond its reach. ■