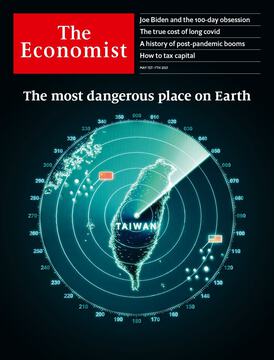 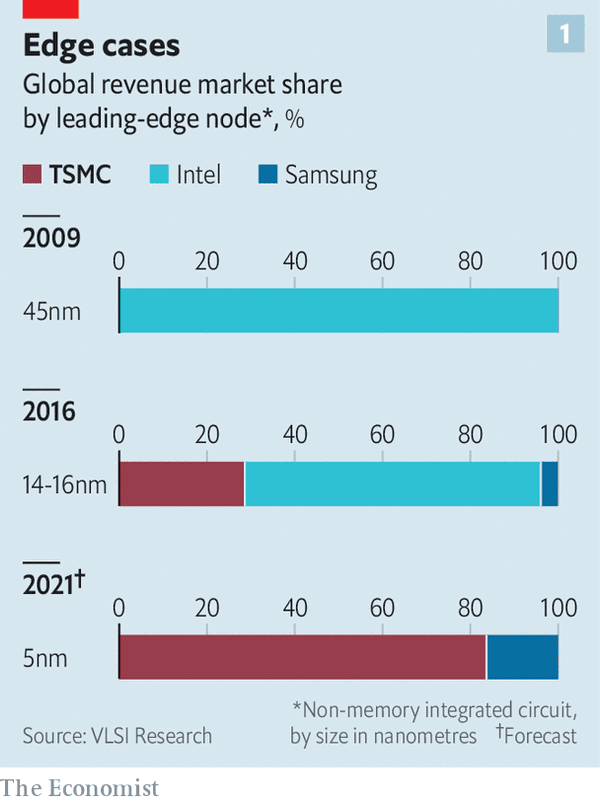 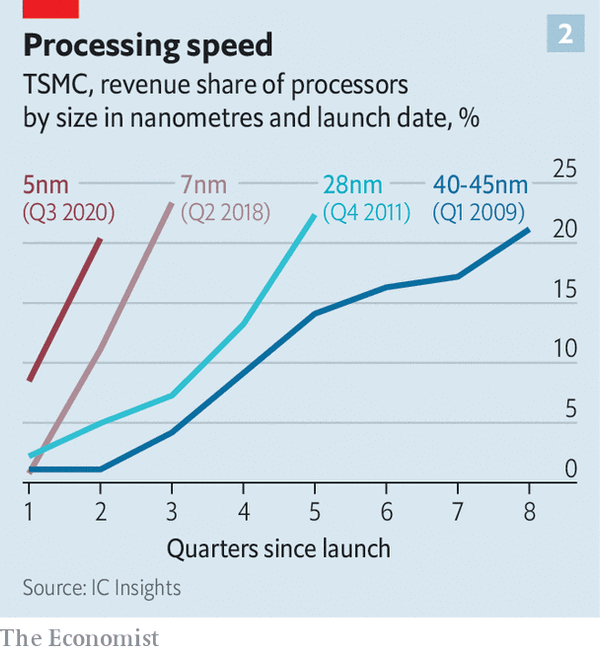 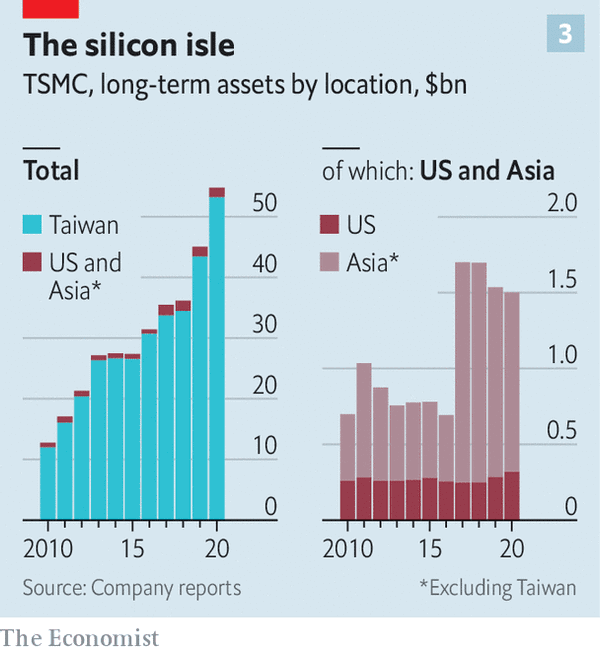 How TSMC has mastered the geopolitics of chipmaking

Make yourself indispensable to both America and China

CHIPMAKERS’ CRAFT can seem magical. They use light to stamp complex patterns on a dinner-plate-sized disc of crystal silicon, forming arrays of electric circuits. Once stamped and cut out of the disc, each array is called a chip. The chip’s job is to shuttle electrons in a mathematical shimmer prescribed by computer code. They do the maths which runs the digital world, from Twitter and TikTok to toys and tanks. Without them, whole industries cannot function properly, as carmakers are discovering as they are forced to pause production owing to shortages of microprocessors.

The most important firm in this critical business is Taiwan Semiconductor Manufacturing Company (TSMC). It controls 84% of the market of chips with the smallest, most efficient circuits on which the world’s biggest technology brands, from Apple in America to Alibaba in China, rely to make their snazzy products and services possible. As demand for the most sophisticated chips surges thanks to the expansion of fast communication networks and cloud computing, TSMC is pouring vast additional sums of money into expanding its dominance of the cutting edge.

This has proved to be a successful business model. Last year TSMC made an operating profit of $20bn on revenues of $48bn. It is, in the words of Dan Hutcheson of VLSIresearch, a firm of analysts, “the Hope Diamond of the semiconductor industry”—and, with a sparkly market capitalisation of $564bn, the world’s 11th-most-valuable company. It is also an astute geopolitical actor, navigating the rising tensions between the two superpowers, including over the fate of its home country, which China claims as part of its territory and to which America offers military support. In 2020 62% of TSMC’s revenue came from customers with headquarters in North America and 17% from those domiciled in China. It has managed the geopolitical divide by making itself indispensable to the technological ambitions of both America and China.

TSMC was founded in 1987 and for the first quarter-century made mostly unremarkable microprocessors far behind the cutting edge. That changed in 2012, when it negotiated its first contract to make powerful chips for the iPhone. Apple wanted TSMC to push its manufacturing technology as far as it could, as fast as possible, to get an edge over rival gadget-makers. The notoriously secretive Apple appreciated how Morris Chang, TSMC’s founder, made trade-secret protection one of his firm’s priorities; guests to its premises would have their laptops’ USB ports sealed even if they only ever visited a conference room.

Two years later the Taiwanese firm’s chips were powering the iPhone 6, the best-selling smartphone of all time. Revenue from the 220m units sold kick-started TSMC’s ascent. Some of Apple’s competitors also used TSMC as a supplier, and wanted the same thing as the American giant. All paid handsomely for the chipmaker’s efforts.

Thanks to this windfall, TSMC started steaming ahead. It overtook Intel, the American giant which once enjoyed a monopoly on the leading edge, then left it in the dust (see chart 1). Its remaining rival in top-flight chips, Samsung of South Korea, is barely able to keep up. Such is TSMC’s manufacturing prowess that Peter Hanbury of Bain, a consultancy, reckons it has given Moore’s Law, the industry’s prediction-cum-benchmark of doubling processing power every two years or so, at least another 8-10 years of life.

The distance ahead of rivals is growing. TSMC is pouring cash into cutting-edge “fabs”, as chip factories are known, at an unprecedented rate. In January it said it would raise its capital expenditure for 2021 to $25bn-28bn, up from $17bn in 2020. In April it raised the figure again, to $30bn. It plans to spend $100bn over the next three years. Fully 80% of this year’s spending will go on advanced technologies.

It has also stopped cutting prices—which in chipmaking, where processing power has only ever got cheaper, is tantamount to raising them. Its chief executive, C.C. Wei, has said it will skip a planned price reduction in December 2021 and keep things that way for a year. IC Insights, a research firm, calculates that TSMC can charge between twice and three times as much per silicon wafer when selling its most advanced processes, compared with what the next-most-advanced technology will fetch.

This creates a positive feedback loop. Developing the latest technology before anyone else allows TSMC to charge higher prices and earn more profit, which is ploughed back into the next generation of technology to continue the cycle. And the cycle is spinning ever faster. Four technological generations ago it took TSMC two years for those cutting-edge chips to make up 20% of revenues; the latest generation needed just six months to reach the same level (see chart 2). Operating income, which grew at an average rate of 8% year in the decade to 2012, has since risen at an average rate of 15%. Combined with revenues that chip-designers make from semiconductors ultimately forged by TSMC, the company and its customers account for 39% of the global market for microprocessors, according to VLSIresearch, up from 9% in 2000 and a third more than once-dominant Intel.

This is an enviable position to be in. But it is not an unassailable one. The experience of Intel, which has fallen behind in the last two generations of chips owing to technological missteps, shows that even the most masterful manufacturers can trip up. The chip business is also notoriously cyclical. Booms lead to overcapacity, which causes a bust. If demand slackens now that the rich world is emerging from the pandemic having brought forward purchases of gadgets that made it possible to work and relax at home, TSMC’s bottom line would suffer. That would strain its balance-sheet, which has $13bn of net cash, a relatively modest rainy-day fund by the standards of big tech firms. To help finance its most advanced fabs, the company has issued $6.5bn-worth of bonds in the past six months alone.

The most serious danger to TSMC comes from the Sino-American ructions. The company’s position at the cutting edge offers a buffer against geopolitical turmoil. Chip-industry insiders say that the Taiwanese government encourages all its chipmakers, including TSMC, to keep their cutting-edge production on the island as a form of protection from foreign meddling. Taiwanese contract manufacturers account for two-thirds of global chip sales.

Reflecting this, 97% of TSMC’s $57bn-worth of long-term assets reside in Taiwan (see chart 3). That includes every one of its most advanced fabs. Some 90% of its 56,800 staff, of whom half have doctorates or masters degrees, are based in Taiwan. The firm has made soothing noises to both America and China and offered to invest more in production lines based in the two superpowers. But it is hard not to see this as diplomatic theatre. Its Chinese factory in Nanjing, opened in 2018, produces chips that are two or three generations behind the cutting edge. By the time its first American fab, designed to be more advanced than the one in Nanjing, is up and running in 2024, TSMC will be churning out even fancier circuits at home. By our estimates, based on disclosed investment plans, the net value of TSMC’s fabs and associated equipment will roughly double by 2025 but 86% will still be located in Taiwan.

In the past three years the American government has begun to disrupt the delicate balance. It has tightened export controls that prohibit any foreign firm from using American tools to make chips for Huawei, a Chinese technology giant. That applies to TSMC, which in 2019 sold more chips to Huawei than to any other customer bar Apple. Most of these were destined for smartphones and other Chinese handset-makers such as Oppo happily snapped up what Huawei could not. But further American attempts to prevent TSMC from doing business with China could invite meddling by the regime in Beijing, which refuses to rule out taking back Taiwan by force. The Biden administration has also announced a $50bn government plan to revive chipmaking at home: it is doubtful that subsidies will restore Intel’s supremacy but the initiative could involve putting more pressure on TSMC to locate cutting-edge production in America, a strategic trap the firm has been keen to resist.

The rival powers have so far refrained from interfering with TSMC directly, perhaps concluding this is the most reliable way of achieving their technological objectives. If the chipmaker’s importance keeps growing, one of them may decide that it is too valuable to be left alone.