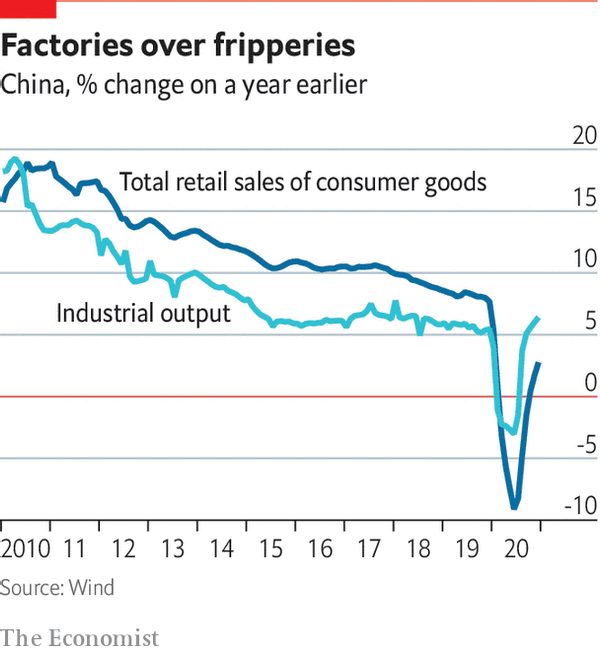 China's economy zooms back to its pre-covid growth rate

IN THE EARLY months of the covid-19 outbreak, researchers at the Federal Reserve and Massachusetts Institute of Technology published a paper entitled “Pandemics Depress the Economy, Public Health Interventions Do Not”. Examining America’s response to the influenza pandemic that broke out in 1918, they concluded that cities that acted early and forcefully had the best economic outcomes. Those that delayed such measures could not escape the pandemic’s shadow: people still curbed their consumption and businesses capped their investment. Cities that imposed strict controls, by contrast, limited the damage to public health and were able to bounce back sooner.

Economists will pore over data from the covid-19 shock for years to come. But China’s GDP figures for 2020, published on January 18th, suggest that the researchers’ findings from the influenza of 1918 were spot on. After its early fumbles in managing the novel coronavirus outbreak, China imposed stricter lockdowns than just about any other country. The new data confirm that it was one of a handful of countries to register any economic growth at all last year.

China’s GDP expanded at an annual rate of 2.3% in 2020 as a whole. Anyone predicting such a pace before the pandemic would have sounded outlandishly gloomy; it is, by some distance, China’s weakest growth rate since 1976, the final year of the Cultural Revolution. In the covid-blighted world, though, things look different. More impressive yet is China’s momentum. In the fourth quarter of 2020 growth accelerated to 6.5%, year on year, faster than its pre-covid rate. With vaccines being rolled out and the base of comparison very low at the start of the year, growth could soar to nearly 20% in the first quarter of 2021.

Nevertheless, the strength of the headline rebound has masked both big imbalances and the difficulties faced by many in China. The industrial sector was the first part of the economy to recover, and has remained its brightest spot. Factory output increased by 2.8% in 2020 compared with 2019. At the other end of the spectrum was the fall of 3.9% in retail sales—a proxy for consumption and a reflection of the way people feel about their prospects (see chart).

The divergence between production and consumption partly stems from the way that China sequenced its economic restart. The government believed, correctly, that it would be easier to contain viral risks in factories, which function as semi-closed ecosystems, often with workers living in nearby dormitories. As early as February, when other countries were just grasping the sheer scale of the health crisis, China carefully reopened its factory gates. It was nearly half a year later before it fully reopened schools.

Chinese factories also benefited from developments in the global economy, distorted and depressed though it was by the pandemic. Between March and the end of 2020 China exported 224bn masks, enough for 35 per person around the world. And its companies were big exporters of the screens and sofas in high demand as people spent far more time at home. As a result China’s merchandise trade surplus hit $535bn last year, up by 27% from 2019 and just shy of a record.

But sluggish consumption at home points to the gloomier side of China’s recovery. In rich countries many governments dramatically increased fiscal support for people who lost jobs during the pandemic. China instead focused its stimulus spending on new infrastructure projects and on cheap loans to companies, hoping that they, in turn, would hire workers and thus support wages. By the end of the year the government could boast that the unemployment rate in cities had returned to 5.2%, the same as at the end of 2019. Wages, though, took a hit. In cities disposable income per person increased by just 1.2% last year, half as fast as GDP growth. Many migrant workers suffered pay cuts.

Inequality also seems to have worsened. As in many other countries, 2020 was lucrative for the wealthy. Asset prices soared, thanks in part to the central bank’s loosening of monetary policy. The CSI 300 index, a gauge of China’s biggest stocks, rallied by nearly 30%, while property prices in the country’s main cities rose at their fastest pace since 2017. In recent weeks, buoyed by the strength of the economy and wary about the red-hot markets, the government has gradually started tapering its stimulus. China’s overall debt-to-GDP ratio shot up by about 25 percentage points last year, climbing to nearly 290%. This year, with credit growth slowing, the debt ratio should stabilise.

Ultimately, though, the good and bad of China’s economic policies in 2020 were far less important than its decision to spare no effort to eliminate covid-19. A small outbreak currently under way in Hebei, a northern province, has once again demonstrated its approach: rapid testing on a mass scale; detailed contact tracing through smartphone apps; limits on travel between regions; and strict quarantines wherever infections are detected. Other countries understandably shy away from such tactics, enabled as they are by China’s authoritarian politics. But they are an extreme version of what should now be recognised as best practice when a pandemic strikes. The crucial first step, from which all else follows, is to try to stop its spread. That was true in 1918—and was again in 2020.