The Economist, Finance and economics. 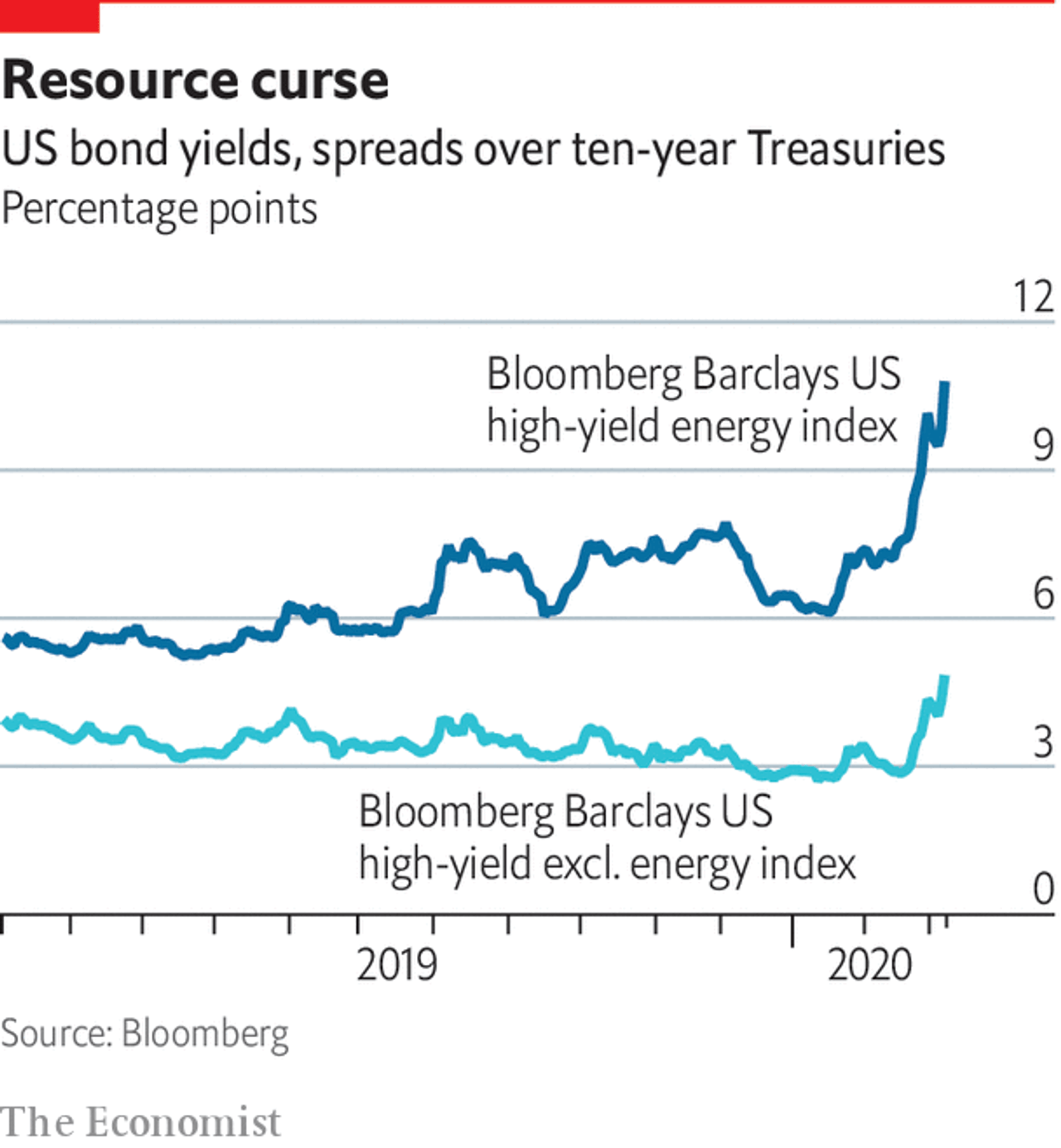 Black Monday: How market panic can feed back to the world economy

In short: via tighter credit for companies already at risk
Finance and economics
Mar 9th 2020

FINANCIAL MARKETS have not endured a day as brutal as March 9th since the global financial crisis of 2007-09. Stockmarkets were a sea of red ink. The S&P 500 index fell by 7.6%. The FTSE 100—laden with oil firms, such as Shell and BP, and other natural-resource companies—suffered a similar drop. Investors rushed for the safety of government bonds. The yield on ten-year American Treasuries dipped below 0.5% for the first time ever. Investors sought other havens, such as the yen. Gold rose above $1,700 an ounce for the first time in seven years.

The backdrop, present for the past fortnight or more, is growing anxiety about global recession as covid-19 spreads. But the trigger for the latest burst of panic was a collapse in the oil price, following a meeting of OPEC ministers and other oil producers on March 6th. Russia (not an OPEC member) balked at cutting production to stabilise the price of crude. The response from Saudi Arabia, OPEC’s largest producer, was unexpected. It offered discounts to its customers and announced an increase in its output from next month. In effect, it launched a price war. Early on March 9th the price of a barrel of the Brent benchmark blend slumped by around a third, almost touching $31, before recovering a few dollars.

But why the panic? Cheaper oil ought to be a balm to the world economy. The oil-price spikes of the 1970s and early 1990s led to recessions because they transferred income from oil-consuming countries in the West to oil-producing countries in the Middle East. The consumers were forced to cut spending, but the producers saved much of their windfall. The net effect was to squash aggregate demand. So a sharp drop should act as a stimulus.

The logic these days is partly reversed. For a start, rich economies are a lot less dependent on oil; it takes far less oil to produce a dollar of GDP today than it once did. Still, the benefits of cheaper oil to consumers are not to be sniffed at. Next, America is once again a big producer of oil, so its economy suffers as well as gains when prices fall. The equation for other oil producers has also changed. Many of them spend freely when the oil price is high. So when prices fall, that element of global aggregate demand falls too.

Russia—the tactical target of Saudi Arabia’s price war—is different. Since 2014 it has run orderly monetary and fiscal policies. It has been a net provider of credit to the world, not a net borrower. And it has saved a lot of its surplus oil revenue for a rainy day, by basing its budget on an oil price of $40 a barrel. Middle Eastern and African producers (and never mind Venezuela) have not been as disciplined. Saudi Arabia itself needs $80 a barrel to balance the books.

Listed oil companies in America and Europe will endure a direct hit to profits if the oil price stays where it is. Much of the red ink on March 9th was spilled in listed oil stocks—which were out of favour even before the spread of covid-19. Yet what worries a lot of investors is the indirect impact of the latest market gyrations. Oil producers account for a big chunk of America’s high-yield (“junk”) bond market (see chart). As a method of squeezing high-cost American shale-oil producers out of the market, there is some logic to the Saudis’ move. An immediate effect of lower oil prices was a further tightening of corporate-credit conditions for the riskiest borrowers. A slug of investment-grade issuers—hoteliers and carmakers as well as airlines and oil firms—must also be at risk. Already there has been a trickle of ratings downgrades to junk. The more stressed markets become, the more credit will be withheld from those companies most desperate for cash to tide them over.

Few foresaw the Saudis reacting as they have to the collapse in oil demand induced by covid-19 and the failure to strike a deal with the Russians. Other surprises are surely lurking. Big falls in equity markets may beget yet further falls, as certain kinds of investors try to limit the volatility of their portfolios by switching into safer government bonds. Another worry is that offshore borrowers of dollars may find it hard to secure funding in future. Japanese banks and insurance firms have been voracious buyers of bonds in America and Europe. Were they to back away, credit markets would come under further strain. Much depends on measures to keep credit flowing. The Federal Reserve has already acted: on March 9th it offered to increase its lending to overnight money markets from $100bn to $150bn.

No end to the market turmoil is in sight yet. For things to stabilise, two things are required. First is a sign that the worst is past—clear evidence that virus infection rates in rich economies are peaking. Second, the price of risky assets, such as stocks and corporate bonds, must become cheap enough to attract bottom-fishing investors. Even to an optimist, these pre-conditions are weeks away. For now, panic reigns.